FLUFF - A Story of Lost Toys

Fluff is a simple, joyful and humorous tale about lost toys told with a twist. It has been acclaimed for its originality, warmth, clever use of comedy and extraordinary combination of song, movement, sampling, projection and audience participation.

The Gingham Family is very concerned for all the lost and discarded toys in the world. They travel around to rescue them and bring them to their colorful home of odd shaped boxes where they welcome them to the family. Each toy is introduced one-by-one and, after seeing a slide show of how they came to be lost, is given a vocal sound, a movement, a piece of music, a nightlight and a nice comfy bed.

Devised and performed by


“One of the most imaginative shows for the young you will find. Highly sophisticated and great fun... the children - and the adults - loved it!” The Advertiser (Sydney Opera House season)


“FLUFF, for me was the absolute highlight of the festival. Christine Johnston created and performed, with her creative team, an absolutely brilliant piece of work. Juxtaposing new technology with handmade toys, this performance was inspired, funny, dark, theatrically clever and sophisticated. ......I strongly recommend you should see it if you get the chance.” Lowdown


“the toy story is simply enchanting.... The pacing is deft and Johnston’s vocal feats a marvel. By the end the children’s participation is guaranteed, and they stream from the theatre with radiant faces."  Sydney Morning Herald

Fluff was Christine’s first work for children with collaborators Lisa O'Neill and Peter Nelson, commissioned by QPAC’s Out of the Box Festival of Early Childhood in 2002. FLUFF has most recently toured nationally and internationally through the USA, Hong Kong and United Kingdom with Cre8ion.

FLUFF would also like to thank Susan Richer (the commissioning Artistic Director of the 2002 Out Of the Box Festival), QPAC, Deborah Murphy, Kylie Burke, Therese Collie, Matt Scott, Russell Stokes, Miren Barrett, Strut & Fret Production House, Theresa & Will from Cre8ion, Arts Queensland, Australia Council and everyone who have generously contributed to FLUFF's long life and those who still are!!

Here's a little intro from The Gingham Family

From Brisbane to Broadway... See The Gingham Family and Fluff on Channel 7 News during their USA tour 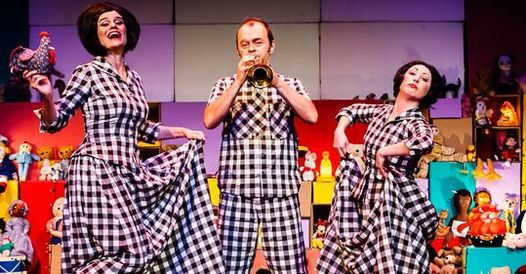